Conversations Around The Politics And Economics Of Media Practice Publishing

Conversations Around The Politics And Economics Of Media Practice Publishing

In this first of a series of short blog posts by the editors of this special issue I would like to highlight one of the themes we have selected to structure the content of ...

In this first of a series of short blog posts by the editors of this special issue I would like to highlight one of the themes we have selected to structure the content of the disrupted Journal of Media Practice, namely Politics and Economics. This theme explores the following questions:

Within this theme we have placed or identified 4 of the projects/papers that are available on or through the platform, although several of the other contributions will be discussing elements related to this theme too. I would like to shortly introduce the projects within this theme and the conversations that have been building up around and across them. 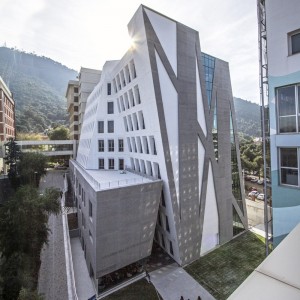 Adam Brown’s paper ‘UniverCity: Images of Success and Structures of Risk’, is based on a participatory web forum (available here) on which Brown and other contributors are compiling and exploring an archive of digitally produced images and videos (flythroughs) that accompany educational architecture, or more in specific, the territorial expansion and redevelopment projects that increasingly characterise the neoliberal university. Brown analyses these renderings as temporary forms of intellectual and physical knowledge production, ideologies replaced afterwards by more messy realities. As Brown argues, these architectures and architectural imagings are produced to convince, persuade, embolden and reassure, where they are mobilised to produce a certain vision and ideology of the university. Brown makes some interesting observations of how this relates directly to publishing, both in form and development and in practice, where, as he argues, the political-economy of publishing is directly implicated in these expansion strategies: both are material and speculative manifestations of the marketization of the university and HE. As Brown states: ‘The traditional academic paper is now structurally implicated in the architecture of the University. As conventional publications generate capital via pseudo-empirical measurements of research activity, capital growth is factored into expansion plans.’ ‘From the promise of this income, buildings arise’

Zach McDowell looks directly at the political-economy of journal publishing as part of his paper ‘Disrupting Academic Publishing: Questions of Access in a Digital Environment​’. He focuses in specific on issues of economics and free un(der)paid labor in traditional academic publishing and how these practices undermine the intent of knowledge production and dissemination. McDowell’s paper is set-up as a wiki to allow other contributors to directly contribute to and comment on his paper. McDowell puts forward a question that is of fundamental importance to this special issue, namely, ‘how can a journal of media practice ever hope to be disruptive if it remains behind a paywall?’ As McDowell argues, this disruption would end up being only a side-step, a gap for this special issue, where he conceives of large-publisher supported academic journals (JMP is published by Taylor & Francis) as an ‘outdated and dying practice’.

Jurij Smrke’s contribution to this special issue ‘Philosophers Have Only Referred to Texts, the Point is to Link Them’ is a meta project in which he aims to explore the potential of automated direct linking from references to the location of these references. Smrke wants to help the contributors to this special issue to link from their texts/references directly to the passages they quote, within the limits of online availability of the originals. Not only is Smrke’s contribution an exploration of the question why this is not yet common practice from a technical perspective, he also aims to explore the ethical and moral questions of linking to online available content, especially to what he calls the ‘deprivatized content’ available in shadow libraries. As Smrke states, even though linking to pirated content that is already available to the public can not be seen as copyright infringement under the European Copyright Directive, many may see it as a grey area best avoided in “public”. This eventhough it offers various possibilities to extend direct linking and make it more robust by offering various locations to link to in inevitable cases of link rot. Smrke is developing his project during the duration of this special issue and is soliciting feedback, both from contributors and others, on some of the issues he is raising, which people can submit via hypothes.is or the blog comments here: http://journal.disruptivemedia.org.uk/blog/commons-practice/ 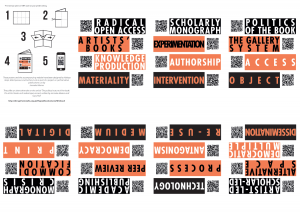 My own paper, Performative Publications, also falls within the politics and economics theme. It explores how we can better align the form of our research with its contents, from both an ethical and a political perspective. Based on a co-authored journal article originally published in New Formations, this project is an ‘extension’ or a further instantiation of that article, republishing it in a form that more closely aligns the argument made within the original article. The contribution to this special issue further extends this performative project/adaptation by adding further observations and reflections on the practice and idea of performative publishing and performative publications via hypothes.is, intermixed with user comments and further peer reviews. These comments then get further entangled with and developed, in an inherently collaborative way, with the content it originally responded to. From a political-economy perspective this contribution wants to further explore what a journal article is or can be, highlighting its processual, collaborative, and inherently multimodal potential. At the same time it continues to extend the ideas of the open access community, where it argues that in line with ideas and practices of ‘radical open access’ the intention is not only to enable more access to publications, but also to promote a continued experimentation with the form of publications, something which unfortunately tends to get de-prioritised within discussions on and strategies for open access.